At the Sound of Her Voice, We Obey Every Day

At the Sound of Her Voice, We Obey Every Day

By Bill Hendrick
The Atlanta Journal-Constitution 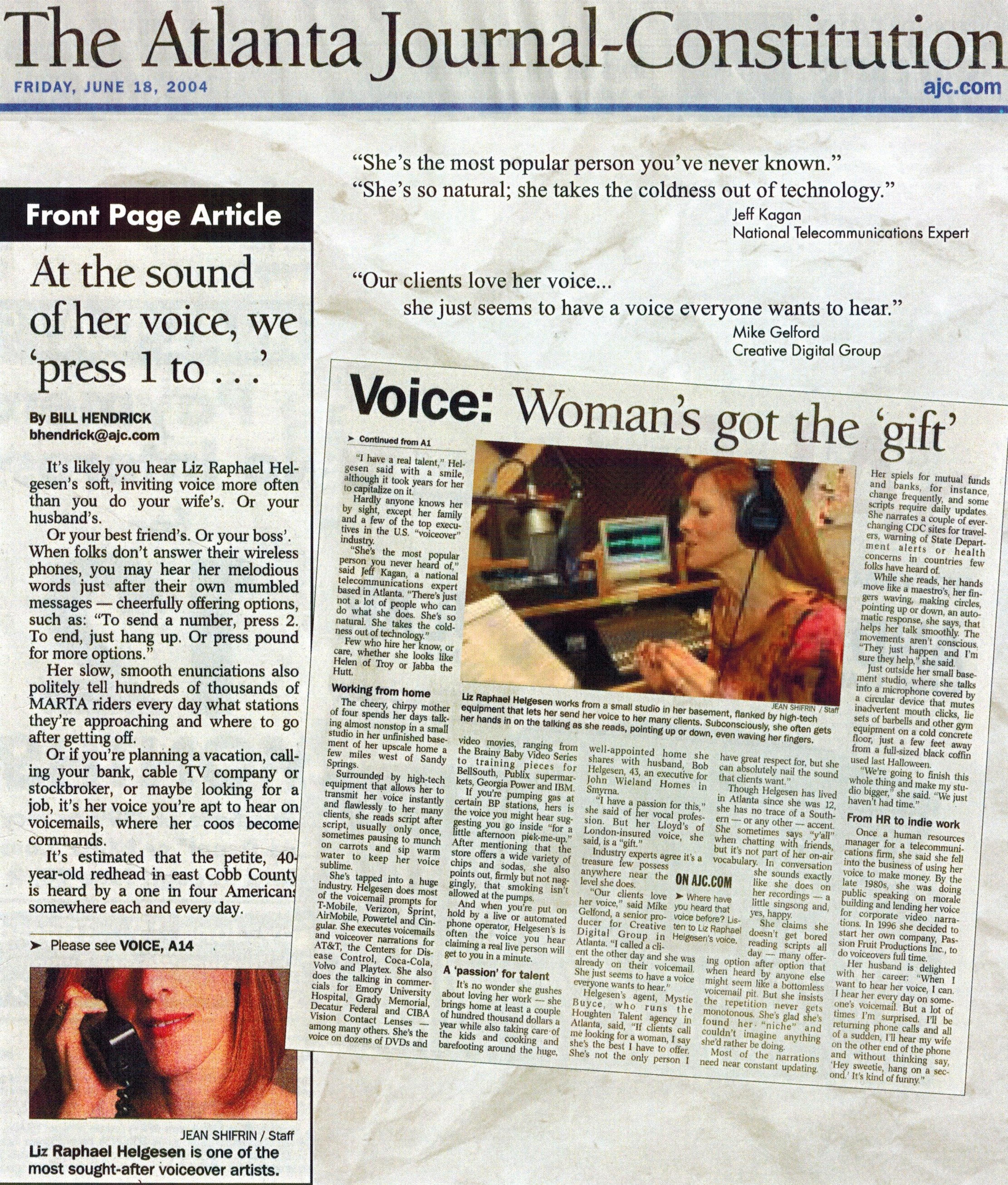 It's likely you hear Liz Raphael Helgesen's soft, inviting voice more often than you do your wife's. Or your husband's. Or your best friend's. Or your boss'. Jean Shifrin/AJC

Liz Raphael Helgesen works from a small studio in her basement, flanked by high-tech equipment that lets her send her voice to her many clients. Subconsciously, she often gets her hands in on the talking as she reads, pointing up or down, even waving her fingers.

When folks don't answer their wireless phones, you may hear her melodious words just after their own mumbled messages — cheerfully offering options, such as: "To send a number, press 2. To end, just hang up. Or press pound for more options." Her slow, smooth enunciations also politely tell hundreds of thousands of MARTA riders every day what stations they're approaching and where to go after getting off. Or if you're planning a vacation, calling your bank, cable TV company or stockbroker, or maybe looking for a job, it's her voice you're apt to hear on voicemails, where her coos become commands. It's estimated that the petite, 40-year-old redhead in east Cobb County is heard by a one in four Americans somewhere each and every day.

"I have a real talent," Helgesen said with a smile, although it took years for her to capitalize on it.

Hardly anyone knows her by sight, except her family and a few of the top executives in the U.S. "voiceover" industry.

"She's the most popular person you never heard of," said Jeff Kagan, a national telecommunications expert based in Atlanta. "There's just not a lot of people who can do what she does. She's so natural. She takes the coldness out of technology."

Few who hire her know, or care, whether she looks like Helen of Troy or Jabba the Hutt.

The cheery, chirpy mother of four spends her days talking almost nonstop in a small studio in her unfinished basement of her upscale home a few miles west of Sandy Springs.

Surrounded by high-tech equipment that allows her to transmit her voice instantly and flawlessly to her many clients, she reads script after script, usually only once, sometimes pausing to munch on carrots and sip warm water to keep her voice sublime.

She's tapped into a huge industry. Helgesen does most of the voicemail prompts for T-Mobile, Verizon, Sprint, AirMobile, Powertel and Cingular. She executes voicemails and voiceover narrations for AT&T, the Centers for Disease Control, Coca-Cola, Volvo and Playtex. She also does the talking in commercials for Emory University Hospital, Grady Memorial, Decatur Federal and CIBA Vision Contact Lenses — among many others. She's the voice on dozens of DVDs and video movies, ranging from the Brainy Baby Video Series to training pieces for BellSouth, Publix supermarkets, Georgia Power and IBM.

If you're pumping gas at certain BP stations, hers is the voice you might hear suggesting you go inside "for a little afternoon pick-me-up." After mentioning that the store offers a wide variety of chips and sodas, she also points out, firmly but not naggingly, that smoking isn't allowed at the pumps.

And when you're put on hold by a live or automated phone operator, Helgesen's is often the voice you hear claiming a real live person will get to you in a minute.

A 'passion' for talent

It's no wonder she gushes about loving her work — she brings home a great living while also taking care of the kids and cooking and barefooting around the huge, well-appointed home she shares with husband, Bob Helgesen, 43, an executive for John Wieland Homes in Smyrna. "I have a passion for this," she said of her vocal profession. But her Lloyd's of London-insured voice, she said, is a "gift."

Industry experts agree it's a treasure few possess anywhere near the level she does. "Our clients love her voice," said Mike Gelfond, a senior producer for Creative Digital Group in Atlanta. "I called a client the other day and she was already on their voicemail. She just seems to have a voice everyone wants to hear." Helgesen's agent, Mystie Buyce, who runs the Houghton Talent agency in Atlanta, said, "If clients call me looking for a woman, I say she's the best I have to offer. She's not the only person I have great respect for, but she can absolutely nail the sound that clients want."

Though Helgesen has lived in Atlanta since she was 12, she has no trace of a Southern — or any other — accent. She sometimes says "y'all" when chatting with friends, but it's not part of her on-air vocabulary. In conversation she sounds exactly like she does on her recordings — a little singsong and, yes, happy. She claims she doesn't get bored reading scripts all day — many offering option after option that when heard by anyone else might seem like a bottomless voicemail pit. But she insists the repetition never gets monotonous. She's glad she's found her "niche" and couldn't imagine anything she'd rather be doing.

Most of the narrations need near constant updating. Her spiels for mutual funds and banks, for instance, change frequently, and some scripts require daily updates. She narrates a couple of ever-changing CDC sites for travelers, warning of State Department alerts or health concerns in countries few folks have heard of.

While she reads, her hands move like a maestro's, her fingers waving, making circles, pointing up or down, an automatic response, she says, that helps her talk smoothly. The movements aren't conscious. "They just happen and I'm sure they help," she said.

Just outside her small basement studio, where she talks into a microphone covered by a circular device that mutes inadvertent mouth clicks, lie sets of barbells and other gym equipment on a cold concrete floor, just a few feet away from a full-sized black coffin used last Halloween.

"We're going to finish this whole thing and make my studio bigger," she said. "We just haven't had time."

From HR to indie work

Once a human resources manager for a telecommunications firm, she said she fell into the business of using her voice to make money. By the late 1980s, she was doing public speaking on morale building and lending her voice for corporate video narrations. In 1996 she decided to start her own company, Passion Fruit Productions Inc., to do voiceovers full time.

Her husband is delighted with her career: "When I want to hear her voice, I can. I hear her every day on someone's voicemail. But a lot of times I'm surprised. I'll be returning phone calls and all of a sudden, I'll hear my wife on the other end of the phone and without thinking say, 'Hey sweetie, hang on a second.' It's kind of funny."